Change Ad Consent Do not sell my data UConn in the News, Nov. 30 | The Boneyard
Menu
Log in
Register
Install the app
You are using an out of date browser. It may not display this or other websites correctly.
You should upgrade or use an alternative browser.

Do you mean the debate about whether or not Deckard was a Nexus 7 replicant? You'll have to ask the Nexus 7 Leader.
"I'm always leery of someone who tells me how hard they work. Hard workers just work hard and let their results speak for themselves." -Geno Auriemma

There are two avenues of discussion I'm aware of. There may be more. One is the usual technical screw-ups such as continuity issues. There are many listed in this link:

The other I'm aware of goes to debate over whether Ridley Scott had employed some subterraneous Marxist theme. I suspect folks might be over-thinking the movie here. Who knows...maybe I'm just an under-thinker

In an essay entitled, "Technology and Politics in the Blade Runner Dystopia", written by Judith B. Kerman, the author investigates the factual truth of the story by interviewing Ridley Scott and researching other pertinent texts. Kerman points out the discrepancy in the housing arrangements, the fact that J.F. Sebastian lives in a huge apartment in an empty building while there is obvious overcrowding at the street level. Kerman explains this potential flaw in the movie by quoting Marx. She writes that such a contradiction is pointed out by Marx as an inevitable, irrational problem created by capitalism. The proliferation of weapons to never be used and prosperity coming at the expense of the unemployed and disadvantaged are examples of this capitalistic contradiction that Marx outlines. It is through the work of the masses of the street level Los Angelinos and the replicants that enables the higher classes to move off-world. Though Scott never has said that he was attempting to make a Marxist movie, being British and having an outsiders view allows him to see the problems with American society. Doing so, perhaps unconsciously, he has created a scathing review of our society. Scott has also extrapolated from the current trends of large corporations controlling much of the capitalist market, and also controlling the governmental regulation of these huge companies. This is another reason why we see Tyrell in cahoots with the police. But instead of using the model of a dynamic and controlling businessman as the leader of a huge corporation, he instead has a genius, a man of science who created a product that caused his to rise to the top, in this case, of society. As we watch Bill Gates and other computer designers create huge empires based on their inventions, the character of Tyrell does not seem so far off into the future."

The number of Replicants discovered in the story does NOT equal the number mentioned in the
beginning of the flick. For years many of us true Runnarians believed that Harison Ford
was also a replicant!

HERE IS THE ANSWER! 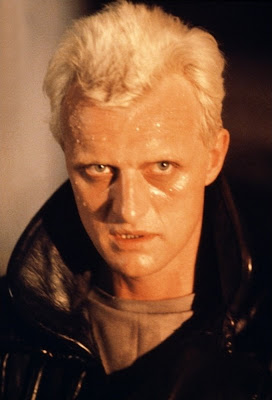