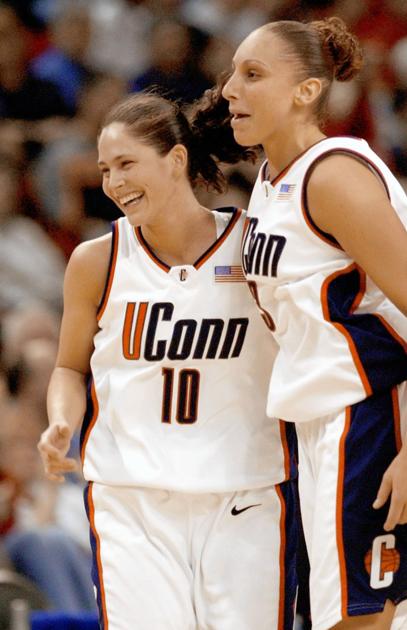 With 11 national championship banners hanging in the Gampel Pavilion rafters, it’s almost unfair to limit the program’s best to a top 10 list. Imagine telling a player on the 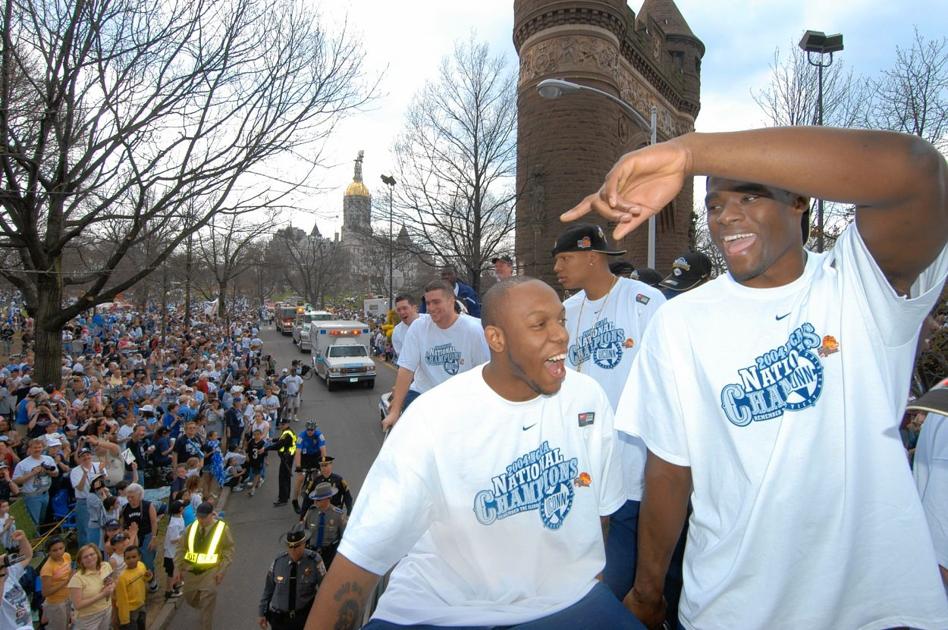 The UConn men’s basketball team has won four national championships in its history, quite a haul for a program that was not even on the national radar until the late

I watched the replay of the 2014 National Championship game last night. That was the game when Moriah guarded KMac to the team bus. We won by about 20, despite Bria's shot being flat and off (she started about 2-10 but hit 2 treys late). Achonwa was out with an injury, but Stef and Stewie were too good, and Stokes grabbed every rebound in sight. Moriah made Crystal look slow, which is really tough. And Kaleena posted up and rebounded, along with hitting some bombs. That team was very, very good.

The incredible thing for the women is that the top 10 cannot include all of the national championship teams. It doesn’t get much better than that.

And undefeated teams can’t even get into the top 5.

Who guards Taurasi? Mo. Then who guards Bird? Mo. Both Bird and Taurasi were better than Jefferson. Jones, Cash& Williams vs Tuck & Stewie. Gabby, Collier and Lou weren't ready for that tenacious play of those 3.

The JI obviously hates UCONN. I mean let's get real - if they REALLY cared about UCONN, it would be the TOP 20 teams, not just the top 10...

By the way that was sarcasm. Being silly like people who think ESPN actually has it "in" for UCONN...

2. 2016-arguably the best, but I think 2014 was stronger with a more complete starting 5. Stewart was on another level that season.

3. 2002-another contender for #1. Front court was good but I think for its time it doesn't hold up well compared to how well rounded the front courts were in 2014 and 2016. Back court is UCONN's best ever.

4. 2010-hard to differentiate between 2009/10 because both teams were so utterly dominant. Edge to 2010 since Charles really blossomed this year and Maya was still Maya.

5. 2009-Montgomery was in prime form this year and Maya was outstanding. Their destruction of Oklahoma was a remarkable bloodbath in the regular season. No one ever came close to beating them.

6. 1995-the first undefeated UCONN team. Had 4 players who'd go on to be All Americans and legitimate POY candidates. Obviously they wouldn't hold up well to today's day and age, but for their time they were clearly one of the best teams of the 90s.

7. 2015-they had the fluky Stanford loss, but once they caught their stride they destroyed everyone. Until the title game, every win was by 14+ and only 3 wins were by fewer than 20 points. Only tough competitor all year was a very good Notre Dame team. Went 4-0 against Final Four foes, winning by an average of 19 per game.

8. 2000-this was probably the first season Geno coached where UCONN truly felt like the top dog all season long. Shea Ralph was in prime form, Abrosimova was also a 1st Team AA and Sue Bird was outstanding at the PG spot. They had their share of close calls and lost to a very good Tennessee team but their Final Four performance was remarkable.

9. 2017-maybe not a popular pick to put on here, but this team was really really good. Their OOC was insane and they went undefeated through it. They handily beat all 3 other #1 seeds, beat a top 5 Maryland team on the road, and 4 other top 15 teams in non-conference. The Tulane game was a weird fluky moment, and the 2017 Final Four game also felt super fluky. The combination of Williams/KLS/Collier was lightning in a bottle that year with all of them having arguably career years.

10. 2003-I'm not sure why people rate 2004 over 2003.....I think 2003 was hands down the better squad. DT had her best collegiate season, the team went 37-1 and had some marquee moments like beating Tennessee in OT and beating #1 Duke on the road. 2004 is obviously a similar roster make up but they had 4 losses, weren't a 1 seed and were fortunate to play at home in regionals. Beating Tennessee that year wasn't as impressive or noteworthy as in 2003, and they lost to Duke at home.

11. 2018-Very similar to 2017 but with Stevens/Walker, yet the team never had the same magic IMO. Beat up on another good non-conference schedule, but had close calls to undermanned Notre Dame and Texas. The Final Four game also didn't feel fluky to me like the Mississippi State game did, Notre Dame was on par with UCONN in both meetings.

12. 2013-their season as a whole wouldn't get them on the list, but arguably no other team finished the season as well as this team did. Once Stewart found her form they absolutely destroyed everyone in the tournament. Won their last 4 games by an average of more than 26 ppg, won the title game by 33. The rest of the year they pounded most foes but had a kryptonite in Notre Dame who they lost to 3 times. 4 losses total keeps them lower.

Going with 15-16 because of a prime Stewart. With her height and arms and in her prime (While DT wasn't) - she'd create enough problems to allow her team to get good looks.

I think the year UConn has DT, Bird, Cash, Jones and Willams is the best. No other class has such strong roasters.
B

cbraarj said:
Who guards Taurasi? Mo. Then who guards Bird? Mo. Both Bird and Taurasi were better than Jefferson. Jones, Cash& Williams vs Tuck & Stewie. Gabby, Collier and Lou weren't ready for that tenacious play of those 3.
Expand ...

There is no one on the 2001 team to guard Stewie, and Kia is as tough as anyone who ever played at Uconn. Tuck and Stewie were better as Seniors then anyone on that team up front.

EricLA said:
The JI obviously hates UCONN. I mean let's get real - if they REALLY cared about UCONN, it would be the TOP 20 teams, not just the top 10...

By the way that was sarcasm. Being silly like people who think ESPN actually has it "in" for UCONN...
Expand ...

Would it be out of line to ask ESPN to do a bracket on the top 16 UConn teams? (Understanding, of course, that there would be spirited discussion here about the teams left out of the 16.)

FairView said:
Would it be out of line to ask ESPN to do a bracket on the top 16 UConn teams? (Understanding, of course, that there would be spirited discussion here about the teams left out of the 16.)
Expand ...

Not at all out of line - I'm sure they would appreciate the suggestion. They're filling some of their radio time with 64-movie brackets to see what's the bet movie of all time, etc, etc, etc. There's only so much "No quarterback market for Cam Newton & Jameis Winston" you can do - zzzzzzzz....

Winning a national championship is a wonderful accomplishment. In this case it's like looking at a menu containing every food you love and saying "That's the one I want", and ten seconds later saying, "On second thought."

Thanks. That was a great game to watch. I had forgotten how great a rebounding team the 2002 team was. They were just dominating on the glass and Cash, Jones and Williams were unstoppable down low. Their team defense and switching was just unreal. DT did not have a great game but when they were up by 6 with less than 2 minutes to go and Ok was surging Geno called a clear out for Diana out of a timeout and she took it on the left side of the court and backed her player down, then spun to the basket for the short pull up while double teamed. Basket good, Stacy Dales fouled out on the play and D made the and 1 and Huskies are up by 9. Then Bird just took control of the ball and they started fouling her and case closed. It was a gritty win. The announcer said that UCONN did not make a single 3 in that game. Greatest women's college team ever? They have my vote.

A team that gets overlooked in terms of its ability is the 96-97 squad. They were undefeated going into the tournament, even beating Tennessee by 14 that year I believe, but than Ralph got injured in the first round game. Auriemma observed that the whole squad did not handle that well. They struggled after that (relatively speaking) and then lost to Tennessee before reaching the Final Four. I get why they would not be in the top ten, but before injury to Ralph they were a better team than 2001 was before injury to Abrosimova and Ralph. That team never gelled well while too many stars were in need of playing time. Had they not lost Ralph in 97 I give that team a high probability of winning the championship, which also would mean another undefeated season.

I also remember that as the year that drove BudFrog crazy because Auriemma would not start Ralph, despite her clearly being one of the top five players even as a freshman.
B

Don't think so. Moriah was a great college point guard but Bird was the greatest ever. Cash, Williams and Jones were terrors underneath and would cause a lot of trouble for Stewie and Tuck with their speed, strength and athleticism. While Stewie will get her points, who is going to stop the GOAT, even as a sophomore?

Jones was always way under appreciated for her talents

BBallF said:
Don't think so. Moriah was a great college point guard but Bird was the greatest ever. Cash, Williams and Jones were terrors underneath and would cause a lot of trouble for Stewie and Tuck with their speed, strength and athleticism. While Stewie will get her points, who is going to stop the GOAT, even as a sophomore?
Expand ...

My thinking is that the 2016 team could bring effective defensive pressure non stop. Moriah /Kia would be all over DT / Sue. Just my opinion
Last edited: Mar 24, 2020