Change Ad Consent Do not sell my data Brittney Griner quotes on Swin and Geno | The Boneyard
Menu
Log in
Register
Install the app
You are using an out of date browser. It may not display this or other websites correctly.
You should upgrade or use an alternative browser.

First post here, so hope the link works. Big 12 media day interviews. BG has some nice things to say about Swin and talks about playing for Geno.

Thanks for posting. Swin is a good example for any young player to follow. She never stops working and doesn't allow struggles at the offensive end to affect her effort at the defensive end.

Any big news out of Big 12 media day? I assume Baylor and A&M were picked as preseason #s 1 and 2?

Mulkey had some interesting quotes on the future of a Baylor A&M series after this year.

I'm not a big Mulkey fan, but I like her answer, and I like how she delivered it.
If I take my meds, I'll probably be OK.

Texas as #3. Makes sense. I looked at Oklahoma's roster and I think it will struggle this year.

That was an interesting response from Mulkey to say the least. Wow.

"The Big 12 women’s basketball media day was launched when Baylor coach Kim Mulkey delivered a zinger in response to a question about whether she will continue to schedule SEC-bound Texas A&M in the future.

Mulkey said she put a lot of thought into her answer because she knew the question would be asked. She told reporters she would answer the question thoughtfully -- with humor -- and she hopes the media gets her message.

Mulkey then repeated quotes from Texas A&M’s president in which he compared Big 12 affiliation to a value-less marriage that’s over.

"And that stuck with me," she said. "So, basically he's talking about a divorce. And I think I know a little bit about a divorce. And my feeling is this: If a man wants to divorce me and says our relationship has no value to him, and then he asks me if he can sleep with me, the answer is: No!"

Mulkey, by the way, is divorced.

Later, Mulkey said Baylor has played Texas A&M twice a year since 1974. She suggested that Baylor has played A&M more than any other opponent. And now? “We’re not going to play them anymore because they decided playing us was not important to them.”

Nice response.
Now if she would just stop jumping around so much during the game...

Swin is an American success story. I believe she grew up in a housing project in McKeesport. She became a great basketball player and a great young woman. She has 2 NCAA championships, 3 WNBA championships, 1 World Championship, and 1 Olympic gold medal. She has started her own business and foundation. Washington and Jefferson College awarded her with an honorary degree in Doctorate of Public Service at their commencement ceremonies in May 2011 to honor her charity work, as founder of the Pennsylvania based Cash for Kids charitable organization. So, that is #32, Dr. Swin Cash--athletic, very attractive, and very admirable. 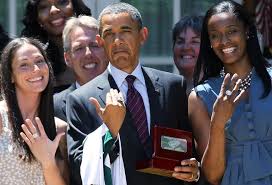 "Dont be the same, be better"

Damn, Kim Mulkey going for jugular with that one!

A lot of Texas schools across various sports are trying to boycott A&M in various ways.
Wise Guy