Noon:
#21 Ohio State @ #14 Illinois - Fox: Illinois hasn’t played since their loss to Maryland while the Buckeyes beat #15 Rutgers by 9 last Saturday. We know about Illinois’ firepower but Duane Washington and EJ Liddell are developing as a nice 1-2 punch for Ohio State. If Ohio State wants to be serious contenders in March, they need to shore up their perimeter O and D (210th-ish overall in both categories).

Marquette @ St. John’s - FS1: If St. John’s wins, this would be their most impressive win of the season. Even though Champagnie has been a revelation, St. John’s is laking the skill to be more than just a nuisance in the Big East.

North Carolina @ Florida State - ESPN: Even though North Carolina’s squad is better this year than last, it’s weird that their top 3 scorers are 6’10 and taller. Their freshmen guard duo of Caleb Love and RJ Davis can’t shoot and until they figure that out, I don’t expect much from UNC this year. With Florida State, MJ Walker has really stepped up this season as their offensive star and the team is shooting better (46.6 fg%, 37.2 3p%) than a typical FSU team. No one wants to play Florida State in March any year and this year is no exception.

1 PM:
San Diego State @ Utah State - CBS: After all-time great Sam Merrill graduated, Utah State has been the surprise mid-major team this year. Undefeated in conference play (and beating San Diego State on Thursday), the Aggies have Power 5 size led by center Neemias Queta (12.4p, 9.4r, 1.4s, 2.7) and Virginia transfer wing Marco Anthony (12.0p, 5r, 2.5a, 41.7 3p%). Their Achilles’ heal so far is their freshmen point guard duo of Rollie Worster and Steven Ashworth who have shared the load. If Utah State wins this game, they should be in the top-25.

VCU @ Richmond - CBSSN: Richmond was projected to be the top team in the A-10, but between their Covid pause and losing Nick Sherod for the year, it’s who they are and what they do. VCU has been so much better than expected: many thought this would be a rebuilding year but Bones Hyland has been excellent averaging 18.1 ppg and excelling on both sides of the court while freshman PG Ace Baldwin has been surprising secure (4.8 A/1.9 TO) and a ballhawk (2.2 steals per game).

2 PM:
#7 Michigan @ #23 Minnesota - ESPN2: We’ve talked a lot about Michigan here lately, but despite Minnesota’s recent 1-3 record, Marcus Carr has been a stud (20.9p, 3.9r, 5.5a) and transfer Liam Robbins (center from Drake) and Both Gach (wing from Utah) have been double-digit contributors. Minnesota needs to shore up their 3p% (30.3%) and defensive rebounding (286th in nation) to sustain success in the Big Ten.

#8 Creighton @ Butler - FS1: I didn’t realize how much of an agitator Aaron Thompson could be.

Coastal Carolina @ Georgia State - ESPN+: The Sun Belt is an underrated league this year and two of the conference’s best battle it out. While Georgia State is led by their guard trio of Corey Allen, Justin Roberts and Kane Williams (43.9 ppg), the team is really missing injured Cincy transfer Eliel Nsoseme who has averaged a double-double so far but could return for this game. OG Cliff Ellis is leading Coastal Carolina and is now on his 44th year as a collegiate coach.

3 PM:
Stanford @ Colorado - PAC12: Colorado has been very impressive this year thanks to senior lead guard McKinley Wright IV’s best year effort in terms of both production (15.2p, 5.6a) and efficiency (53.2 fg%, 36.1 3p%).They’re old, have a great lead guard and play slow: a recipe for success in the tournament.

4 PM:
#2 Baylor @ #15 Texas Tech - ESPN: The game of the day. McClung has averaged 19 points/game over his last four and scored 22 in the big win against Texas. Huge week for Chris Beard if they beat Baylor and I’ll be rooting for him despite also being a fan of what Scott Drew has built in Waco.

East Tennessee State @ Furman - ESPNU: The class of the SoCon (Furman) against a reloading ETSU team that’s one year away from being really good again.

6 PM:
#18 Virginia @ #12 Clemson - ESPN: #13 defense vs #1 offense: Clemson is the new Virginia. The first team to score 50 wins. Clemson is undefeated when Aamir Simms scores over 15. Has Sam Hauser ruined Virginia’s defense? Him and Kihei Clark have been major issues on Virginia’s D.

Northern Iowa @ Loyola-Chicago - ESPN2: Stinks that AJ Green is out for the year, but this is still one of the best rivalries in mens’ basketball. One benefit of AJ Green’s injury? The development of freshman guard and “the next one” Bowen Born (11.2 ppg).

Oklahoma @ Oklahoma State - ESPN3: In-state rivals who are both solid middle of the pack Big 12 teams.

10 PM:
#1 Gonzaga @ Saint Mary’s - ESPN3: My annual “Sunday Cup of Coffee” game. Whenever these two play, I record the game and first thing in the morning with my coffee. I love the tradition of this rivalry. Saint Mary’s isn’t a slouch thanks to senior Tommy Kuhse’s big jump from junior (5.9 ppg) to senior (14.5 ppg) year.

I love these rundowns. Thank you for taking the time to do it!

I'd probably use a different A-word for Thompson, but that's just me. Thanks for the schedule, much appreciated.

St. John’s lookin solid so far. Gonna be a test on Monday.
Syracuse on the other hand 😬
P

Really hope we can end up splitting the series with Creighton. Down early to Butler but without Bouk it’ll be a challenge.

Buddy sure put on a shooting clinic. Can Pitt really be that good?

The truth is out there.

FSU did well against UNC...considering that Scottie Barnes was out....a win over UNC is always an occasiion to pour a glass.

Husky68 said:
Buddy sure put on a shooting clinic. Can Pitt really be that good?
Expand ...

7-2 record but outside of Northwestern their OOC was soft and in conference play they’ve only beaten Miami, Cuse twice.

Their schedule beefs up in February and KenPom projects Pitt to go 2-5 that month. If they go 4-3 in February then they have a case of making some noise as an ACC sleeper. 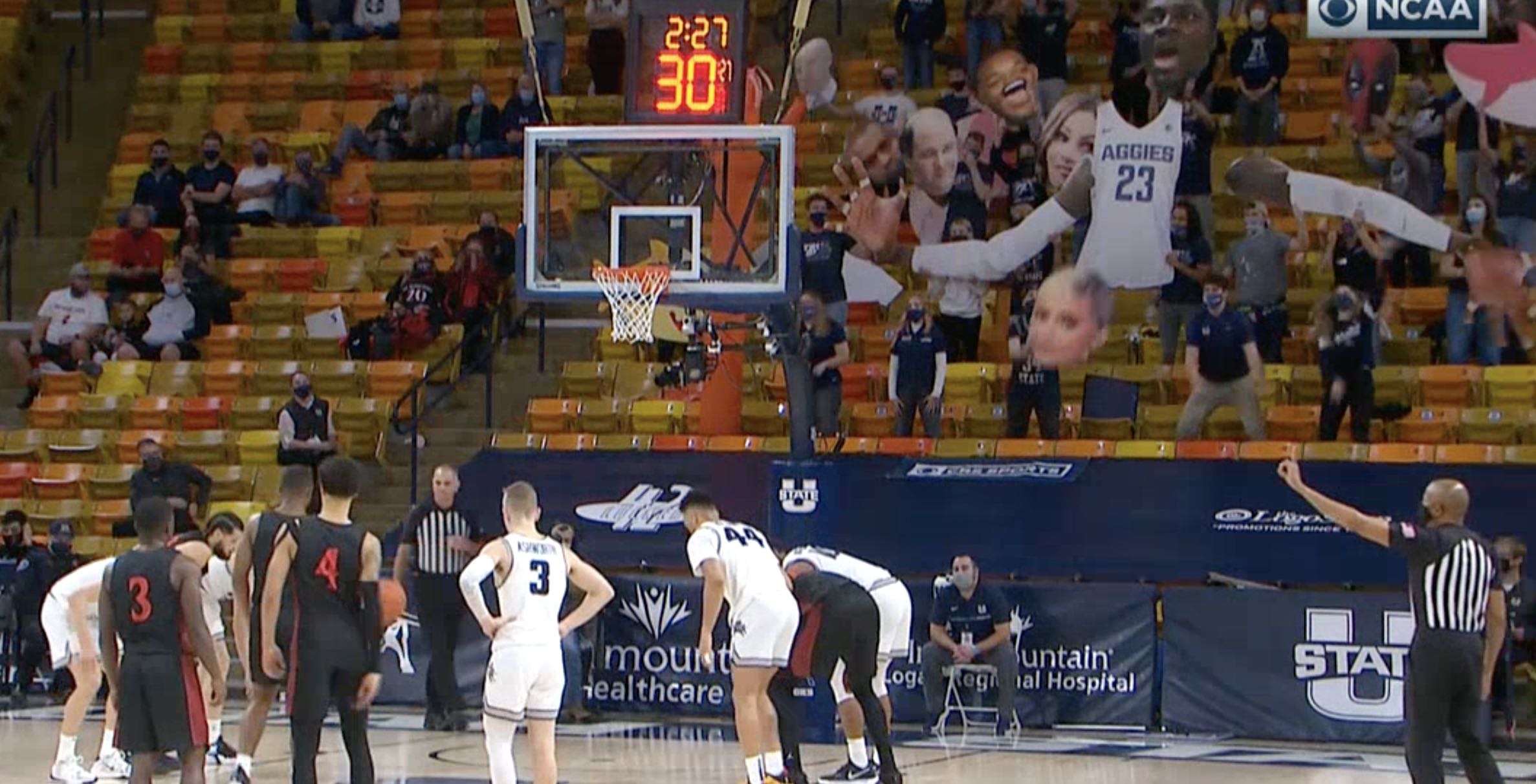 Funny year...pitt, Duke and UNC may be fight ing to make the bubble.

Effort performance of the day: that mask for trying to fit over Bruce Pearl’s face

Creighton and Butler going down to the wire.

Just when you think you've figured out the Big, Michigan goes and gets blown out by a team they previously blew out.
A

Butler was down 11 with 5 minutes left. Came back and tied it, had the last shot. Missed 2 layups, one a complete bunny and the other blocked. OT we go.

auror said:
Butler was down 11 with 5 minutes left. Came back and tied it, had the last shot. Missed 2 layups, one a complete bunny and the other blocked. OT we go.
Expand ...

Missed an easy wide open put back with a second left. Playing hard though give Butler credit.

The Champ Is Here.

3rd game this year I saw Creighton choke away a game. This time it finally cost them.

Pick them for a deep bracket run at your own risk. They are soft as hell defensively and play with no poise down the stretch of games. They are more 20-25 range than top 10.
A

Butler fed off the crowd in OT and pulled it out. Think we would've done the same if we had the circumstances.

Going to be a lot of shakeups in the top 25. Several losses in the top 10 and lots of ranked matchups.

I assume that means uconn is in 2nd place now