storrsroars said:
KEA is in a league all his own when it comes to UConn swagger.

I'd put Bazz at 3 because his teammates recognized swagger when they saw it.

After that it's a tossup between a bunch. And I don't really care enough.
Expand ...


If taking crunch-time pull-up 26-foot 3s on the reg isn't swagger, I don't know what is.

But yeah, KEA is the far-and-away #1. Dude got up on a scorer's table in an opposing team's gym. Then he told the world UConn was going to shock it and shock it we did.
S

Ts5034 said:
100% Rashad Anderson is on the All Swagger 1st team. I loved the days when he would be so hot from 3 that he would run back down the court blowing on his hands.

I would also add Boatright, Khalid, Shabazz, Caron, and Vital. An honorable mention that does not get brought up enough is Charlie Villanueva.
Expand ...

You've got the best list. Others listed some great players, but being a great player is not synonymous with "swagger" which is defined as:

To me, "swagger" doesn't have to mean arrogant. It's knowing you're good and not being afraid to exhibit it in the way you carry yourself during warmups, games and interviews. Never doubting yourself, knowing all eyes are on you and not fearing it, and having "the look" in your eyes when your team needs you to make a big play.

Hard to pick a top five, but here's mine:
Khalid El-Amin (the all-timer, showed it by taking over practice on his recruiting visit)
Chris Smith (knew he was a leader from day one and took everything in stride)
Kemba (a "quiet swagger" in that he believed in himself but was not arrogant)
Shabazz (never a doubt in his mind that he could do whatever had to be done to win)
Christian Vital (never exhibited any doubts he could make any shot or any play)

Honorable mention:
Tate George (I'd take him to make the critical free throws whenever we needed them)
Earl Kelley (didn't get to showcase it as much as some because the team was not great)
Rashad Anderson (never saw him look as if he doubted the next shot would go in)
Caron (wanted the ball when it counted most and you knew he'd make the shot)
Charlie V (cool, calm and unfazed in whatever he did)

For us mortals like us it's believing we're "not always right, but never in doubt"

AZHuskiePop said:
Yep Donny was the first guy I thought of
But swagger is more than a chip or cockiness it’s an air of
confidence. That gives everyone else on the team confidence. Ray , Rip, Emeka,Ben ,, Kemba and to a lesser.
degree Bazz and Donyell were the epitome of that kind of swagger.
Expand ...

I did a full spread for Playgirl Magazine.

To make these old Courant links work, you gotta click the dropdown arrow in Google and click on the cached version, then link to that.
I

Marat said:
Who would you put on a UConn all swagger 1st team ? I would have to put 3 PGs on mine.

Khalid El-Amin - The original king of swagger, leader from day 1, clutch, and not afraid to
take on the opposing fans.

Kemba Walker - The next king of swagger and best UConn PG .

Shabazz Napier - the put you on your back clutch leader who just refused to lose, and
gave the NCAAs his thoughts.

Emeka Okafor - Best UConn center, and showed all his swagger on the court.

the 2014 team had the kemba mentality

ClifSpliffy said:
look at him woofin' and stylin' - the Captain of the all-swagger team, or at least, it's founder.
opening question to Cliff:
'do you think the big east realizes now where the University of Connecticut is?
and so it began. ask any fan of those nba teams that Cliff played on for 18 years, if swagger was part of his character.
Expand ...

Uggh! I became a Uconn fan the following year with the dream season. One of my biggest regrets in life is not becoming a Uconn fan sooner. You guys old enough to have seen the very start of the calhoun era are so lucky. You seriously have no idea how much i envy that experience.

TheChamps990411 said:
Uggh! I became a Uconn fan the following year with the dream season. One of my biggest regrets in life is not becoming a Uconn fan sooner. You guys old enough to have seen the very start of the calhoun era are so lucky. You seriously have no idea how much i envy that experience.
Expand ...


I became a fan Cliff's senior season and I'll never forget watching the poor guy sit in the draft night green room while team after team passed him over.

A great player and a great guy. RIP.

4hunnid anyone? Say what you will but no one will ever have as much swagger in a 30 point blow out loss to Tulsa.

Boatright had more swagger than both Kemba and Shabazz

UcannUconn said:
4hunnid anyone? Say what you will but no one will ever have as much swagger in a 30 point blow out loss to Tulsa.
Expand ...

nomar said:
I became a fan Cliff's senior season and I'll never forget watching the poor guy sit in the draft night green room while team after team passed him over.

A great player and a great guy. RIP.
Expand ...

Poor guy had the last laugh. He became a terrific pro. He had like a ten year span where he was one of the better forwards in the league. I wonder how that Uconn team the following year wouldve faired with him at center. Likely final 4 with a chance with that defense to give UNLV a good run.

If it's a team with the most swagger....gotta go with '99 Khalid, Ricky, Rip, Kevin, Albert, Rash

Greathusky said:
It looks like the Yard has different definitions of swagger. My definition includes charisma, a "not in my house" attitude and mouth opening plays.

It's not surprising so many UConn players had swagger, when your HOF coach exuded it when he walked across the floor.

For the definition of swagger, I think there is 1 NBA player who defined swagger to the extent he need not be named.

For our newest editorial, we get a peak into the life of Four Three Energy CEO, retired NBA Star, and former NCAA National Champion, Jake Voskuhl. We had the pleasure of sitting with Jake and talking about life after the NBA as an entrepreneur in Houston, one of the biggest energy-producing...

I'd have loved to see a few more questions in that interview, way too short!
C 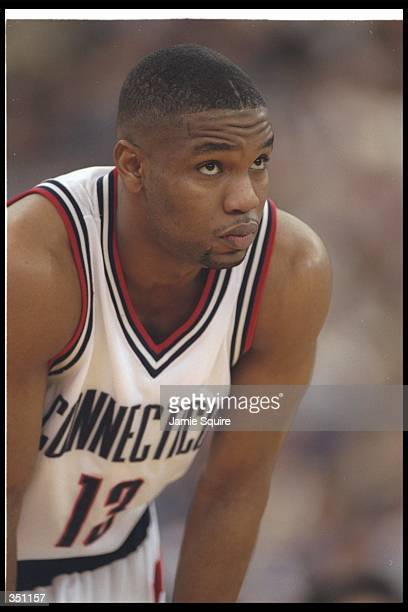 I know Earl Kelly was mentioned, but he would be my MVP. I remember a game vs Syracuse that the Huskies trailed by 1 and Kelly was fouled shooting 2 with about 2 seconds left in the game. The ref handed him the ball, and it was picked up by a mic. He took the ball and said it's all over fellas! That takes some serious stones!
E

hey! that link didn't include the seasons he led the cba, or the greek league, in rebounding!
he got sooooo hosed his senior year by our old pals the ncaa, when they pulled his card for the rest of that season, for accepting 1 free airline ticket. senior year, steadily rising stats, Captain,
nba draft coming up. turrible.
C

There are plenty of candidates but Nadav needs to be on the list if only for a game against Georgetown.

I seem to remember Nadav and Mourning going at it all game and at one point Mourning blowing a kiss at Nadav while at the foul line. Nadav did not react but the next time UCONN had the ball they cleared out for him and he just took it to Mourning. Nuff said.

Not to mention the attention he received on campus.