Change Ad Consent Do not sell my data Top defensive players in coll bball | The Boneyard
Menu
Log in
Register
Install the app
You are using an out of date browser. It may not display this or other websites correctly.
You should upgrade or use an alternative browser.

Making the board a little less insufferable

Anyone got the insider for this? Please tell me 'Bazz is at least one of the pests??

A native of Boston's Roxbury section, Napier has the perfect bulldog mentality for Jim Calhoun. He defends on the ball with the toughness of a guy who grew up in Boston's Roxbury section. And, like Craft, he's got lightning quick hands that manifest themselves in a very solid 4.1 percent steal percentage. Only a sophomore, Napier's defense will get better with experience.

AO got an honorable mention too.

They are the pests, the stoppers, the gamblers, the glass eaters and the rim protectors. Here are my top defensive players for the 2011-12 season in college basketball. 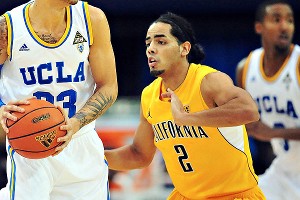 Gary A. Vasquez/US PresswireJorge Gutierrez brings hustle and high-voltage defensive energy when he's on the court for Cal.
The Pests

My defensive pests aren't usually 6-foot-4, but Gutierrez is an unusual player. Even if he didn't score a point for coach Mike Montgomery, he would still impact games because he is all over place in the Golden Bears' half-court defense. His hustle, high voltage energy and defensive IQ stand out -- especially versus Pac-12 opponents.
Aaron Craft, Ohio State
Craft has an amazing ability to stay in front of seemingly quicker point guards and harass them to a point where they are far more worried about losing the ball than running their team's offense. While he's got quick feet, a key part of Craft's ability to disrupt opponents are those ultra-quick hands. Add in his high school football player's strength and toughness, and you have a player that other Big Ten teams already love to hate.
Casper Ware, Long Beach
Ware is one of the best points guards in the country. Period. At 5-foot-10, he has excellent quickness, great court vision and is an improved shooter who is an extension of coach Dan Monson on the court. But it's at the defensive end of the floor where I have fallen in love with his game. He rarely takes a play off on that end of the court, and that type of energy from your on-court leader is rare. It makes Monson a very lucky man.
Shabazz Napier, UConn
A native of Boston's Roxbury section, Napier has the perfect bulldog mentality for Jim Calhoun. He defends on the ball with the toughness of a guy who grew up in Boston's Roxbury section. And, like Craft, he's got lightning quick hands that manifest themselves in a very solid 4.1 percent steal percentage. Only a sophomore, Napier's defense will get better with experience.
The Stoppers

I've watched enough tape to say that Nored might be the best all-around defensive player in the country. He is a very good on-the-ball defender, even better away from the ball and has the defensive IQ of a 20-year coaching veteran. He's hard to screen because he has physical toughness and plays with courage. ESPN analyst, Dan Dakich, who sees him all the time in Indianapolis, agrees.
Jeffery Taylor, Vanderbilt
I love Taylor's all-around game, although I am not as high on his NBA potential as others are. But there is no denying that he is an All-American candidate at the small forward position. At 6-foot-6, he is quick enough to guard perimeter players and strong enough to post players. With that type of versatility, he will anchor the Commodores defense this season.
Kent Bazemore, ODU
The high-flying Bazemore will miss the first part of the season recovering from a broken bone in his left foot. But when he returns, he will be one of the best wing defenders in the country. While he has dramatically improved his offense over the course of his ODU career, it's his energy and passion that make him one of the CAA's best players.
The Gamblers

If you are looking for a terrific zone or press defender, Cunningham is your guy. The 6-foot-4 junior is as good as there is in the country at running through passing lanes en route to an explosive dunk. Besides his outstanding athleticism, his cat-quick anticipation is a nuisance for Pac-12 opponents trying to attack the Beavers' various zone looks. 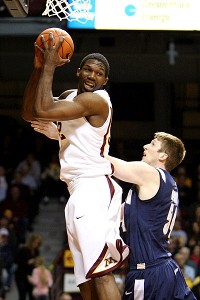 Most defensive possessions should end with a defensive rebound, so a player that is willing to go into the lane and mix it up is a commodity. Tubby Smith has that type of guy in Mbakwe. In addition to a body that can dish out punishment, Mbakwe is a quick jumper, has a 7-foot-3 wing span and -- like most good rebounders -- has a nose for missed shots.
The Rim Protectors

What I love about Henson is that he has reinvented himself as a player. After failing as a perimeter player in his first season, he got stronger, added some weight and took advantage of his athleticism and incredible wingspan to become a "mistake eraser" for Roy Williams' defense last season. The transformation started in the very first game of his sophomore season when he dominated Lipscomb with 10 points, 17 rebounds and seven blocks. It's not going to be easy to score at the rim on the Tar Heels this season.
Anthony Davis, Kentucky
If John Calipari is comparing his 6-foot-11 freshman to Marcus Camby, that's good enough for me. Like the former national player of the year, Davis had a late growth spurt, a similar body type and natural shot-blocking skills. And despite what some may think, he'll be learning about the game from one of the country's best defensive coaches. He's capable of dominating the game on both ends of the court.
C.J. Aiken, Saint Joe's
The 6-foot-9 sophomore from the Philly suburbs may have the best shot-blocking instincts in the country, blocking almost 14 percent of opponents shots last season. Not surprisingly, he has great instincts, timing and a quick jumper. If there is a hoops resurgence this season on Hawk Hill, Aiken will be a big reason why.
Others deserving mention: Tu Holloway, Xavier; Dexter Strickland, North Carolina; Michael Snaer, Florida State; Robert Sacre, Gonzaga; Alex Oriakhi, UConn; T.J. McConnell; Zeke Marshall, Akron; Festus Ezeli, Vanderbilt; Quincy Acy, Baylor; Michael Kidd-Gilchrist; Reginald Buckner, Ole Miss; Jay Threatt, Delaware State; Kerron Johnson, Belmont

The whole Uconn starting 5 could be on this list... Lamb likes getting in the passing lanes too