Change Ad Consent Do not sell my data The unique importance of Big East league play | The Boneyard
Menu
Log in
Register
Install the app
You are using an out of date browser. It may not display this or other websites correctly.
You should upgrade or use an alternative browser.


Despite spending the entire regular season unranked (West Virginia and Pittsburgh both spent time in the polls) and having a worse overall record than the Mountaineers, the Huskies earned the league's BCS bid. They earned it thanks to two wins of three points or less in the middle of their conference season.

That makes Big East conference play unique. The round-robin format allows no team to escape with a "easy draw" and a field goal in October could determine who gets a bid to a BCS bowl in January. The Big East has never had a team pick up a BCS at-large bid, and likely will not in 2011.

Like I said, it won't always be pretty. But for the teams involved it will always matter. They are not playing for style points or computer rankings in the Big East. They are fighting against each other for one prize, one game at a time.
Expand ...

And that field goal could come at any time during the season. I will never forget December 4, 2010, when Dave Teggart's 52-yard field goal (4th of the night) with 17 seconds left in the game against USF earned the Huskies the title of Big East Champions and a trip to the BCS Fiesta Bowl. 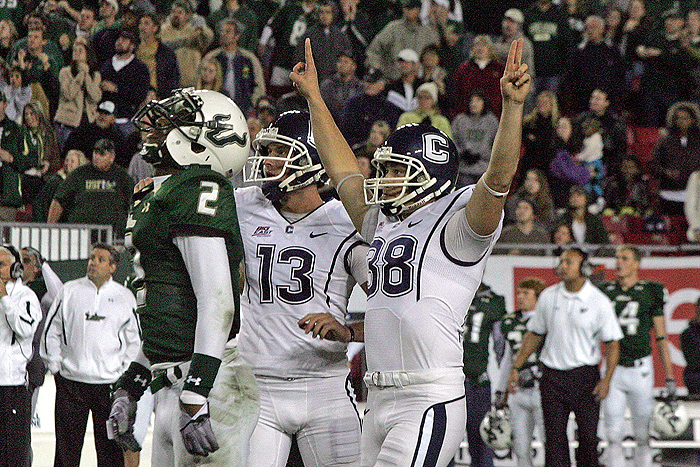