The No. 3 UConn women’s basketball team faces its biggest test of the season as the Huskies host No. 2 South Carolina on Monday. UConn is 8-1 all-time vs. South Carolina. The Gamecocks won their first game of the series last season, 70-52. The Huskies are coming off an 87-58 win over Marquette last Friday. Paige Bueckers became the first UConn freshman to score 30+ points in back-to-back games and junior Christyn Williams scored 18. This is UConn's annual Pink Game. 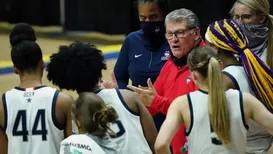 Here’s what you need to know about the matchup:

No. 2 UConn women’s basketball vs. No. 1 South Carolina: time, how to watch, broadcasters, preview

It won’t be the matchup in front of a packed, raucous Gampel Pavilion crowd as originally intended, but Monday’s UConn-South Carolina game is shaping up to be a showdown of epic proportions.

Husky bites
Paige Bueckers was selected as both the BIG EAST Player and Freshman of the Week, as announced by the conference Monday. Bueckers reached the 30-point mark in both wins for the third-ranked Huskies last week, tallying 32 points off 13-of-20 shooting in Wednesday's win against St. John's before scoring a game-high 32 in Friday's win at Marquette. She was 12-of-18 from the field against the Golden Eagles to tally a .658 shooting clip for the week, including an 11-of-15 (.733) mark from three.
They’re hitting their stride:’ UConn women have their hands full with South Carolina, but they’re not the same team that lost to Arkansas two weeks ago - Alexa Phillipou
Nelson-Ododa ready for test with South Carolina - Doug Bonjour
Huskies can't lose middle ground - Carl Adamec
The entire NCAA women's tournament will be held in the San Antonio area - Mechelle Voepel