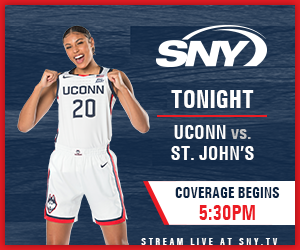 Here’s what you need to know about tonight's game:
Site: Carnesecca Arena (Queens, New York)
Time: 6 p.m.
Series: UConn leads, 42-17
Last meeting: No. 3 UConn 94, St. John’s 62, in Storrs, Feb. 3, 2021
TV: SNY (Meghan Culmo and Allen Bestwick)
Livestream: You can watch the game on the Fox Sports App or https://www.foxsports.com/. Some fans say they are only able to access games via fox.com/sports or the Fox Sports Now app, though, so try that if needed. The games might not appear on those sites until right around tipoff.
Radio: UConn IMG Sports Network on 97.9 ESPN (Bob Joyce & Debbie Fiske)

No. 1 UConn women’s basketball vs. St. John’s: time, how to watch, broadcasters, preview

UConn has its first chance to defend its new No. 1 ranking Wednesday evening, when it takes on St. John’s in its second road trip in a stretch of five straight away games.

Husky Bites -
The season is coming to an end. Only 4 games left after tonight. 12 calendar days.

NCAA Women's Tournament selection show:
The committee will announce the 64-team championship bracket at 7 p.m. Eastern time on Selection Monday, March 15, on ESPN. Official team travel parties with a maximum of 34 individuals will arrive Tuesday, March 16, and Wednesday, March 17, in San Antonio. All teams will be housed in hotels in San Antonio and other areas of Bexar County. The hotels will be used exclusively for teams and other Tier 1 tested individuals. First round of play begins March 21st & 22nd.

Sharing The Sugar - Three BIG EAST teams rank in the top five among all Division I teams in assists per game: No. 2 UConn (21.5), No. 4 Villanova (20.9) and No. 5 Marquette (20.6). When considering how many field goals each team averages, the Wildcats lead the BIG EAST by assisting on 75 percent of their baskets. Marquette follows with a 71-percent clip, while the Huskies round out the top three by dishing on 66 percent of their makes. Creighton also provides helpers on over 60 percent of its buckets, as the Bluejays have 202 dimes on 315 made field goals for a 64-percent dish rate.

This Week In The BIG EAST