The UConn women’s basketball team begins its last series of regular-season games tonight on the road at Creighton (Omaha Nebraska), for the first time in program history. After tonight's game, they head east for a stop in Indianapolis Indiana to play Butler on Saturday. UConn closes out the regular season with a home game against Marquette on Monday March 1.

UConn clinched at least a share of the Big East regular season conference title with a win at Xavier last week. The Huskies can win the championship outright with a win tonight. This is just the third all-time meeting between the Huskies and Bluejays with UConn holding a 2-0 record. UConn won this season's first meeting on Dec 17, 80-47.

Creighton is coming off a 65-41 loss to Marquette on Monday. This season, Temi Carda leads the Bluejays with 13.9 points and 3.7 assists per game. Creighton (7-9, 6-6 Big East) is sixth in the Big East standings but is in the midst of an impressive stretch, beating Seton Hall and No. 19 DePaul over the last few weeks. 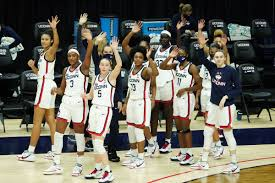 Here’s what you need to know about the matchup:
Site: D.J. Sokol Arena - Capacity 2500
Time: 5 p.m. EST
Series: UConn leads, 2-0
Last meeting: No. 3 UConn 80, Creighton 47 in Storrs, Dec. 17, 2020
TV: SNY (Meghan Culmo and Allen Bestwick)
Livestream: You can also watch the game on the Fox Sports App or https://www.foxsports.com/. Some fans say they are only able to access games via fox.com/sports or the Fox Sports Now app, though, so try that if needed. The games might not appear on those sites until right around tipoff.
Radio: UConn IMG Sports Network on 97.9 ESPN (Bob Joyce and Debbie Fiske) Coverage begins 30 minutes prior to the tip.

No. 1 UConn women’s basketball vs. Creighton: time, how to watch, broadcasters, preview

The No. 1 UConn women’s basketball team kicks off its last stretch of regular season games Thursday evening, when it takes on Creighton on the road for its first of three games in five days.

The Fox Sports and FoxNow apps/channels currently have the game listed in the "Upcoming" sections.
It is also listed in the Live TV schedule on FoxNow.