Not to jinx her, and I hope I don't appear in a Dr. Pepper commercial soon, but Griffin has improved from 60% last year to over 80 so far. That is great. Liv has improved from around 55 to 59, better but lots more room to improve, especially as she takes takes a lot. As we have seen in crucial games in the past, just one or two more made free throws could have prevented a game from going to overtime where we ..... I forget, I must have blocked it out. And even though she still misses some bunnies, her shooting percentage is up too. I think she misses them so she can pad her rebound stats, same as Liv.

"Never seen any player" not improve his FTs. Take a look at this guy: 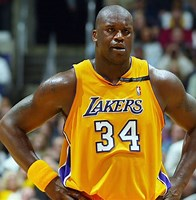 Look at my COMPLETE statement. If he did not improve, he did not put the extra practice time in, and really didn't care if he shot better.
S

Almost every one will shoot better in practice; but, common sense says that the more you practice, the better you will be.
U

Not to take this convo on a left-hand turn, but Shaq's hands are so massive, it would be like me trying to make a FT with a softball. HAHAHA.

And, my biggest gripe with this team is FT shooting. It's streaky at best and our best players aren't good FT shooters, except Paige. It could cost us down the road.

Practice is important, but like anything else in sports if the mechanics are bad, it will have limited impact - unless the practice is being used to improve the mechanics. Practicing mistakes only gets you so far.

A free throw shooter with good mechanics could take six months off and shoot it well immediately. You know it when you see it - relaxed wrist and forearm, soft knees, nice arc, lots of backspin, limited movement. Think Larry Bird.

The latter one - limited movement - should be easiest to fix. But a lot of players are all over the place. Too many moving parts.

Missing to the left or right should not happen at this level. I think most misses are long - because they are too stiff, don’t bend knees and release upward enough, ball doesn’t float enough.

Not surprisingly, Paige has the best free throw mechanics on the team.
Y

100% agree you`'ve got to get mechanics right or muscle memory remembering wrong things. Ono good example. No bend or lift from her legs. she can improve a little with practice but won't get good unless she (coach?) Tweaks her technique

Bits and pieces on foul shooting:

Through our 7 games the team percentage is .703
How does that compare to other college teams? I don't know but it strikes me as a bit below average.
I would think .750 is a good mark for college...and .800 an excellent one. I believe that was achieved in Stewie's senior year. Maybe someone with tech smarts can track down overall college team percentages?

Paige is at .792 and I bet that goes up as the year goes on. As the primary ball-handler in tight games with a lead it is critical for her to be darn good.

Aubrey is indeed in a nice place....percentage is .813


I imagine that our free throw guru...Olde Coach...he of the extensive [REALLY extensive] free throw post on proper technique...is a tad appalled at the team percentage....maybe he can channel some wisdom down.

BTW: My impression is that Paige's technique is quite similar to Mel Thomas' method...and Mel was excellent.
Simple/no fuss/no dipsy-doodles...I suspect OC would approve.
BTW#2: About as simple as it gets is EDD's...and she is one great free throw shooter...always around .900.
Last edited: Jan 12, 2021

Wilt was terrible and was fouled a lot.

The good foul shooters make running up and down the court several times and then shooting around 80% look easier than it is. You don’t get to practice to get the range. Remember, a missed foul shot is typically off by less than an inch. Wes Bialosuknia was in my UConn class. He had to play freshman ball and on that team he was an insane something like 99 of 101. On the varsity he once had a streak of something like 36 or 37 in a row.

On the positive side, UConn is currently shooting better than last season.

You must log in or register to reply here.