At one point 2020 looked like the year the Sun would finally get banner #1. Bonner for Stricklen, lose Tuck and Clarendon, draft/acquire some "fillers". See you in the Semi-finals. Then the roof caved in as the best young 2 guard and hype machine in the league was lost. Watching last year's replays, there is just no replacing her. The timely rebounds, the go-to buckets in crunch time, the attention she demands from the D, the tempo, the swag. Max contract worthy from the get-go. So we have KML and January replacing Stricklen and Williams. I like them both but, no, not close to equal value.

Then JJ sits out, so even if Briann and Kaleena excel, the fight will be uphill all the way.

So what am I hoping to see out of 2020? I am harboring no thoughts of the end game. This is about individual players and the prospects of success in 2021. If the season is completed, there will be a champion listed in the books with a big * next to it, so it would be great if the Sun get there, but this isn't a "real season" - it would always feel tainted to me.

My presumptive starting line up is: Alyssa Thomas, Brionna Jones, DeWanna Bonner, Jas Thomas and Bria Holmes. Lots of factors could change this, but it's a starting point.

I'm hoping to see Brionna Jones finally approach the level of play in the W that she has shown overseas. Maybe with the increased minutes and the reduction of pressure at the prospect of a quick hook from Coach, she can settle in and be a solid 5 this season. This is a contract year for Bri so motivation and opportunity are aligned.

I have to see Alyssa Thomas stay healthy. She was nothing short of amazing last season and would have been the playoff MVP had the Sun prevailed. She's a runaway freight train with a euro-step and spin move. Everyone in the gym knows what she's going to do, but rarely is she stopped.

I WAS hoping to see DeWanna Bonner mesh smoothly with AT and JJ and enhance, not interfere with, JJ's outside game... see you in 2021. She has the potential to disrupt our offense as much as her potential to enhance it. How that plays out will be interesting to watch in 2020, this could have been a great year to build the chemistry for a 2021 run BUT no JJ now. So critical chemistry building will have to be done on the fly in 2021. Not ideal.

I want to see if last year's "all in" move to acquire Theresa Plaisance was ever really a good idea. She was hampered by a bad back literally from day one last year and never provided the punch off the bench that Coach hoped for. Its a contract year for her too, time to show up and show out.

Kaleena Mosqueda-Lewis could take some of the sting off losing Strick, but she'll have to play (and be used) more effectively here than she was in Seattle. If this were a normal season, the crowd would likely be calling for her to be on the court whether her play and the match ups warrant it or not. It was like that with Kelly Faris and Morgan Tuck too, for at least the first few years. Sometimes this was downright cringe-worthy. Kaleena will be spared that pressure in the bubble and has a chance to find/create her role here before she ever sets foot in the Sun Arena.

I'm hoping that rookie Kaila Charles turns out to be one of those rare late draft picks that comes in and shines (see Tiff Hayes). She should get a lot of opportunities (especially while Hiedeman and January are out) this season.

Speaking of rookies, could Beatrice Mompremier be a lower-cost alternative to Bri Jones next year? Bri's coming off her rookie contract and may play herself into a fatter contract next season. I think Bri's a great "kid" and teammate and has serious basketball skills but the cap is the cap. In this crazy season Bea will have the chance to prove herself if she's got it in her.

Captain Jas Thomas - can she splash, slash and pass with greater consistency? Nobody works harder than Jas on both sides of the ball. She is a respected leader on the team but does run hot and cold.

When COVID is done with her, can Natisha Hiedeman take a big sophmore leap? She seems to have all the skills to do this and has a great personality to go with it. Seeing T-Spoon really excel would be a huge positive this season and for next. I think she has a high ceiling.

There's the two older veterans, Jacki Gemelos, a nine-year pro with only one credited season in the W (Sky), and 11-year guard Briann January, former All-Star and WNBA champ. What different stories these players careers have been!

I won't recount Jacki's whole story, but many here will recall her UConn connection, and subsequent disconnection. Since then, injuries, comebacks and a tremendous amount of hard work and passion for the sport. Gotta root hard for Jacki.

Briann was a good pick-up but should not be looked at as a Courtney Williams replacement. She's a pros pro and keeps herself in great condition. She has a championship pedigree and carries some attitude on the court. I think it is fair to say, however, that the Williams situation forced the Sun to overpay for a player well into the back nine of her career. That said, when her COVID experience is over, she will at least play a key role off the bench for the Sun. She has the skills to start effectively if that is called for by circumstances.

Last but far from least, I'm hoping to see Bria Holmes emerge as consistent threat on offense and a solid defender. Her game, at its best, has all the elements needed. She has to maintain consistency at a high level. She gave the Sun a home-town discount to stay here and is the only Connecticut native in the league, I believe. If she can really breakout, it would be the story of the season in Connecticut. Baby D is already rocking the bubble on social and seriously trending, so let's see mom do some trending on the court.
Last edited: Jul 16, 2020

I don't see the Sun going as far this year without JJ and also after losing Williams and Stricklen. Bonner is a legit star but KML will have to improve big time. The Thomas ladies are as tough as nails but I'm not sure them and Bonner will be enough. It will require someone special stepping up and filling the gaps left by the previous starters.

MSSportsGuy said:
I don't see the Sun going as far this year without JJ and also after losing Williams and Stricklen. Bonner is a legit star but KML will have to improve big time. The Thomas ladies are as tough as nails but I'm not sure them and Bonner will be enough. It will require someone special stepping up and filling the gaps left by the previous starters.
Expand ...

Next year, the Thomases are both due top scale raises. Since they went all-in with Bonner and Jones, I don’t believe Connecticut will be able to keep both of them.

Shades said:
Next year, the Thomases are both due top scale raises. Since they went all-in with Bonner and Jones, I don’t believe Connecticut will be able to keep both of them.
Expand ...

I thought we had the Thomas sisters locked for next year also, but you're right, they go UFA next year. Ugh.

Hiedeman must now quarantine for four days and undergo additional medical testing to ensure she does not test positive before she’s allowed to join the team on the court. 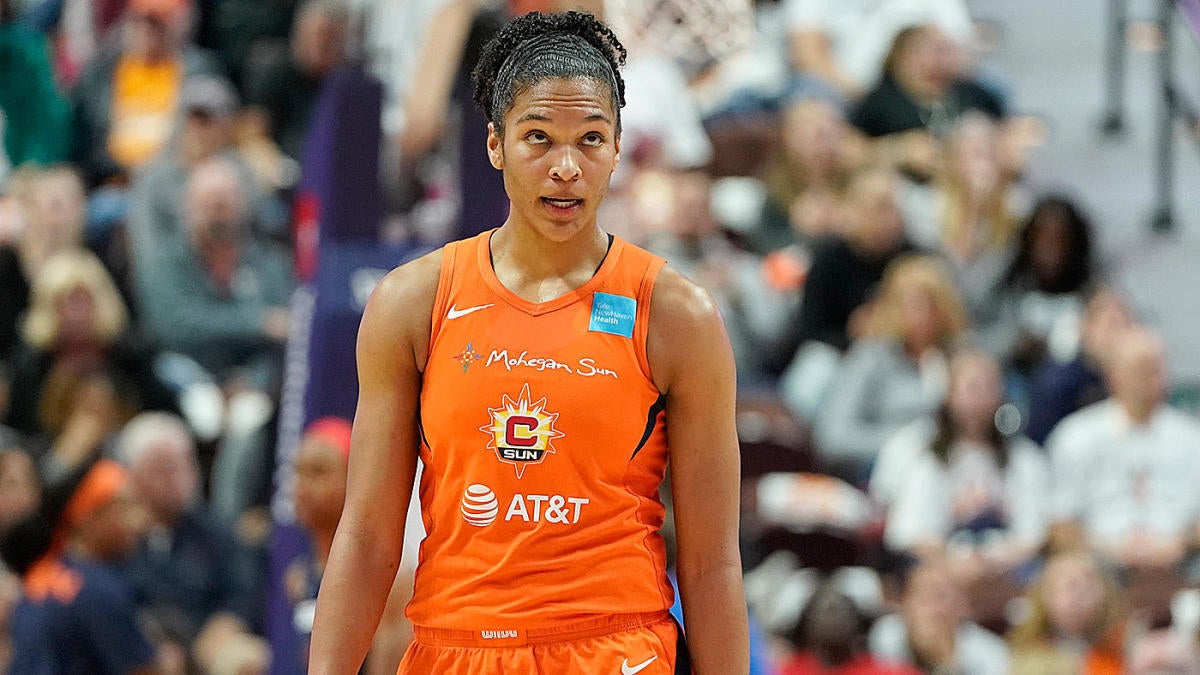 TikTok is the craze now amongst WNBA players.

I hope the wins don’t start with their next game

Bonner is an All Star.