Change Ad Consent Do not sell my data Uconn leads | The Boneyard
Menu
Log in
Register
Install the app
You are using an out of date browser. It may not display this or other websites correctly.
You should upgrade or use an alternative browser.

I mean not to nitpick, but Duke just blew a 17 point lead at home to Belmont on Friday to win by 1.

I knew someone would bring the Belmont game up. But in general 99% of the time Duke turns 15 into 25 or 30. We always seem to let the lead hover around 15.

SouthTampaBill said:
Even with UConn's greatest teams they just never did blow people out.

And the half court game is not this team's strength

We need the Boat
Expand ...


Thats exactly what Im saying. No matter how great we are, we always seem to get lackadaisical when the lead gets to 15 instead of just putting the team away

HuskyFan32 said:
Thats exactly what Im saying. No matter how great we are, we always seem to get lackadaisical when the lead gets to 15 instead of just putting the team away
Expand ...


I agree with that thought, it's been an early season characteristic for many years. They just don't seem to be able to maintain the killer instinct until later in the season. Calhoun will take the W and move on. The Hurleys will use this to build on for Wagner's conference season. Win-win.

Go root for Duke. Why does Duke always choke in the tournament, why do Dook bigmen flop like soccer players the whole game?

Refs destroyed any chance this game had of developing a flow

We don't make it easy on ourselves, but still always manage to win these early games.

Kemba drove the team last year. As much talent as this year's team has, they still have to establish their own identity post-Kemba.

superjohn said:
Go root for Duke. Why does Duke always choke in the tournament, why do Dook bigmen flop like soccer players the whole game?
Expand ...

Someone needs a hug. 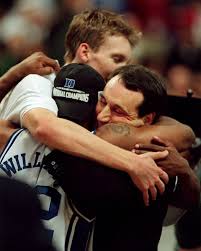 UConn was outscored in the second half for the second straight game. In UConn's four games this season they have had the tendency to jump out to a 20 point lead or so, then screw around for a while, only to go ", it's a ten point game, we better pick it up". It may not cost us against teams like Wagner, but taking plays/series of plays off is not a good habit to get into. After a while you can't just flip the switch. It's a very dangerous habit to get into, and something that I did not notice from last years team. The 09-10 team would do the same thing, where they would look lost for minutes at a time, only to go 5-10 minutes playing with a sense of urgency.

In the future tuneup type games, I would like to see intensity maintained through the WHOLE 40 minutes, not 5 minutes here, 10 minutes there, 5 minutes there. They started off playing very agressive then started to get beat to the ball. The team is going to have to learn how to take a team will away and not allow them to build confidence.
"when did champs go off the deep end?" - Rico444
M

i dont think we necessarily let teams hang around any more than other top teams do, its probably just selective memory. and even if it is true that we let teams linger, its not like its had any effect on the overall success of our program

Part of it is that JC likes to kill the clock at the end of the game. So we tend to lose rhythm at the end. I won't complain because this strategy has worked for us and there are very few games we've blown at the end in March. Most of our losses were in competitive games from the start.
C

It seems like Calhoun is toying with lineups a ton. And it seems they are very focused on running the offense. The biggest concern I had was both Lamb and Napier looked tired on defense. With Boatright (assuming he is all he is cracked up to be) back both Lamb and Napier should be able to exert more effort over a shorter stretch of time.

Napier said it himself in the postgame with Joe D, Calhoun wants them to run more sets, and not to push the transition game until they start playing better competition. We're still not 100% in sync yet, and are working the new guys into the team.

superjohn said:
Go root for Duke. Why does Duke always choke in the tournament, why do Dook bigmen flop like soccer players the whole game?
Expand ...

Your an idiot. Right cuz Im def rooting for Duke. My name is def DukeFan32. Its called an analogy. Insert: UNC, Ky, Kansas, whomever you choose. The point is, we always seem to let these teams hang around and have to work harder than necessary at the end of the game. Happens every year.

I'm an idiot? You clearly don't know what an analogy is you freaking moron.

superjohn said:
I'm an idiot? You clearly don't know what an analogy is you freaking moron.
Expand ...

yeah i realized that right after i posted it. its a comparison not an analogy. everyone on this thread has agreed with me except you. whose the moron?

I guess my question would be - who cares?

Do you mean just this year or in general? I can remember some 20+ or 30+ wins last year and other years as well.

I dont know. I remember in years past Uconn had its share of 100 - 50 type blow outs in early season games. Last year though i remember saying to myself this exact thing how our margins of victory havnt really been that huge. I dont remember all the final scores but outside of the Kentucky game in Maui, the only other blow out i remember was Depaul in the Big East tournament.

You know who was a lot better than Columbia or Wagner? A team that legitimately could have pulled the upset if we let them hang around? Bucknell. I also think the best team that we ever had at blowing teams out of the gym was the one that lost to Mississippi State. One of the ones that let teams hang around too much was the 99 team, which famously beat the team that blew everybody out in the championship game. But, on the flip side, the 04 team would blow teams out and the 06 team let them all hang around. So there is no fool-proof formula. At the end of the season, they just count up the wins - they don't ask how.